Have to say that I wasn't a big fan of Abergue Lua. Yes, the folks who run it are kind and the cost per bed is only eight Euros. However, the quiet hours are from 11pm to 9am. This presents a problem in the morning when the peregrinos who are just coming off the Camino Frances or other Santiago routes want to get up and go at 7 (which is standard for Camino albergues) and the folks who are in Spain simply to go from Santiago to Finisterre want to sleep late. We weren't told of the extended quiet hours...we found out from a sign on the wall, which we read after we had paid and settled in. Though the hospitaleros assured us we could leave at seven if we wanted, the lights in the common room were off when we tried to pack our things this morning. No one could find the switch, so the girls and I packed up in the tiny (but lit) laundry area. Awkward.


A Camino friend, Ildefonso, has kept in touch with us since he and his wife Rosa returned home from Burgos. Ildefonso wrote and suggested we do a short hike today and endure a long one tomorrow or Saturday, since the temperatures are supposed to decrease through the next several days. That was a smart suggestion and we're listening to his advice. (Psst...Ildefonso...don't forget about my email address - patriciaellisherr@post.harvard.edu.). :)

To the many who wrote and suggested we stay in Santa Marina tonight - thank you. We knew there are two private albergues at the 49 km mark (to Finisterre) - the problem is, we want to get to Finisterre by Sat evening, so that means we have to do a 30 km day at some point. The albergues aren't neatly spaced out like they are on the Camino Frances, so we couldn't divy up the days into four nice 22.5 km sections. We wanted to get the big bad miles out of the way sooner rather than later...but Ildefonso has an excellent point. The temperatures are about to drop 15 degrees (F) and there might even be a bit of rain...tomorrow, or even Sat, is a much better day to take on 30 kilometers. All three of us hike our best in cooler weather.

We are therefore happily lounging at Casa Pepa in Santa Marina this evening. We have a cute, bright, and clean room with our own bathroom for forty Euros (twenty Euros a bed...the girls are sharing so I don't have to pay for a third person). The nice fellow at the adjoining bar told me we could have dinner whenever we wanted and he can be available for breakfast at 8am. Perfect.

Photos from today's hike, which took us through tiny (but not-so-ancient) towns, along country roads, and through delightfully shaded woods.

Leaving Negreira early in the morning... 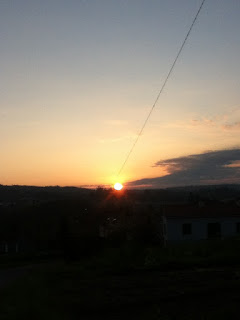 Roads and towns and dirt paths... 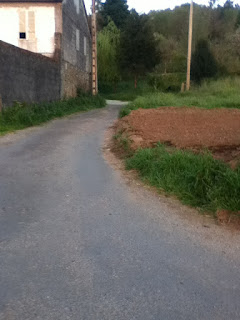 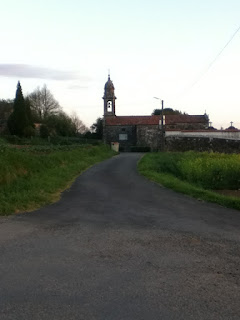 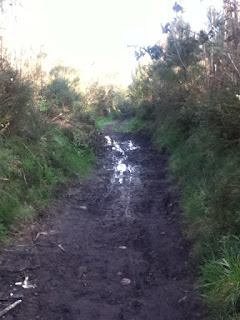 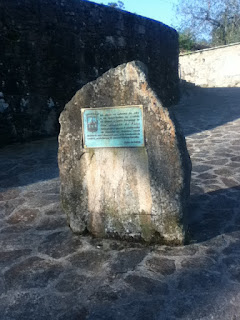 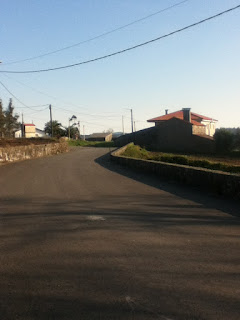 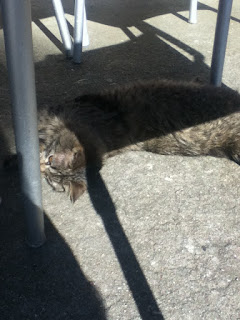 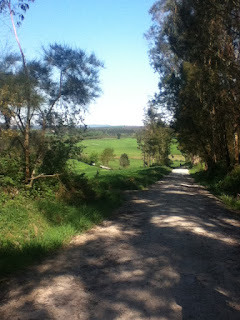 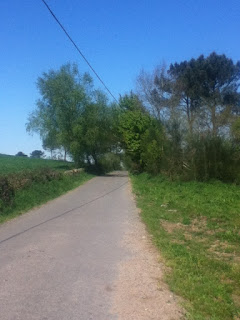 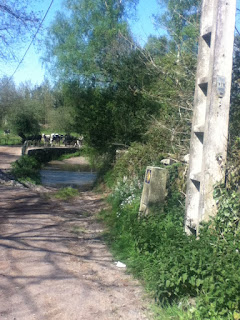 Home-sweet-home for the evening... 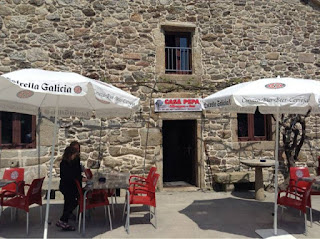 Notes: We missed a turn walking through Zas, two km past Negreira. Don't know exactly where we went wrong, but we ended up walking the road instead of the Camino. Ended up in Camino Real regardless, thank goodness...a kind farmer showed us how to get back on the Camino proper.

The hand-out we were given in Galicia states there's a fountain in A Pena. We never found it...make sure your water bottles are full before leaving Negreira.

Tomorrow's destination is Cee, which, from what I read, is a town close to the ocean. Might we see the Atlantic tomorrow? That would be fantastic. We'll still have ten miles to go before Fisterre, but it would be WONDERFUL to see a coastline tomorrow evening.

Casa Pepa in Maronas/Santa Marina is wonderful. One family runs it...we just sat in the bar and watched them handle a huge rush of pilgrims...the owners were all smiles, efficient, and they served tasty food. I noticed their breakfast menu is quite reasonable - 3.50 for coffee/ColaCao, tostadas and zumo (juice). Price for their pilgrim's menu is ten Euros. Thankfully, nothing seems marked up here like it did in Negreira. So - good people, comfy accommodations, yummy and well-priced food...two thumbs up for Casa Pepa.

We can hear cows a-mooin' from our open window. I'll miss that sound.

Location:Mazaricos,Spain
Posted by Patricia Ellis Herr, Alexandra Herr, and Sage Herr at 11:26 AM

Hello peregrinas:
My suggestion for today is to get all the way to CORCUBION. (32 km. There you can find a donativo albergue (Albergue San Roque) wich have a very good reputation. You can choose to finish at Cee (only 30 km) but the albergue is a private one, and perhaps a little bit expensive.
Buen Camino
Ildefonso.
P.D. Dont forguet to ask for "The Fisterrana" at the Tourist Office in Fisterra. It´s the "pagan Compostela" ;)