I had ten hours of unbroken and blissful sleep last night. The sheets at the Pension Riego de Ambros had a light scent to them - nothing overpowering - the aroma was calming and I slept like a rock as soon as my head hit the pillow. In the morning, the hospitalera waited on us hand and foot for breakfast - she was very sweet and gave the kids candy before we left. We had an excellent stay and I slept so, so well. Two enthusiastic thumbs up.

We were told the Camino between Riego de Ambrose and Molinaseca was impassable due to all the recent rain, so we roadwalked the next 5.7 kilometers. We didn't mind, since the mountain views were gorgeous. 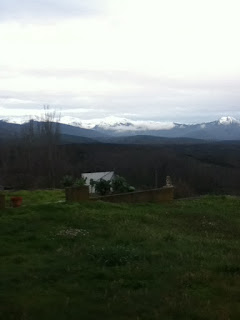 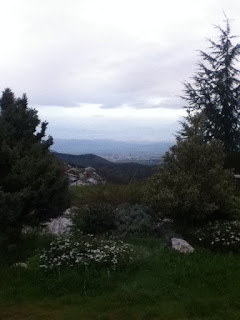 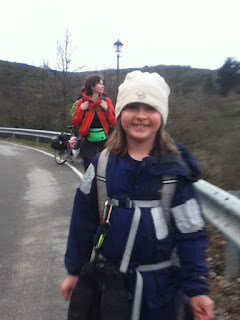 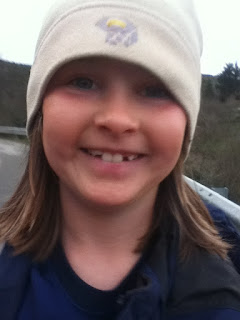 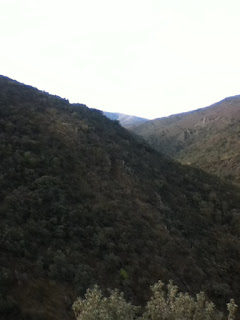 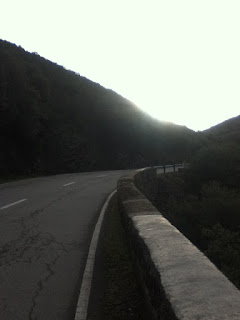 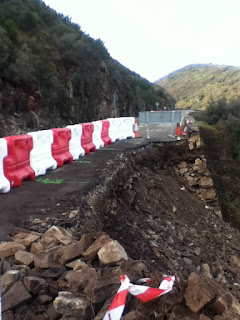 Molinaseca looks like a happening pilgrim town. It's beautiful and has everything a peregrina could need. 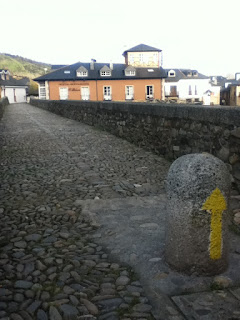 We stopped to buy some food at the cafe just over the bridge. The owner was super-nice and gave the girls free bracelets. He also gave us a postcard with his sello on it - the sello is a picture of his grandfather.

So many people are kind along the Camino!

Onward we walked, toward Ponferrada. 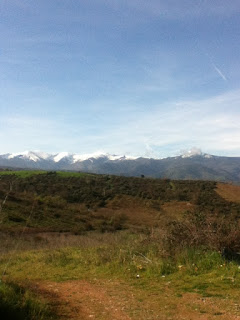 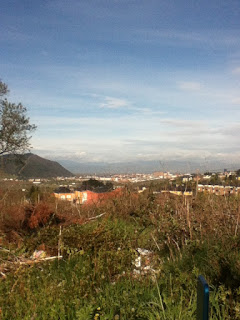 Ponferrada is home to the Templar Castle... 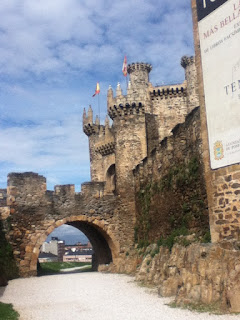 ...we chose not to explore this city, though there appears to be a lot to do here. Wouldn't be a bad place to spend a day off.

We had some trouble finding our way through and out of Ponferrada, as the way was not well-marked.

The day became tough after Ponferrada. The reason - the sun. It came out. Big time.

The girls and I are cool-weather hikers. We work best in 40-60 degree (F) temperatures. Bright sun and warm atmospheres tend to make us melt. That sun bore down on us in all its Spanish glory and no breeze came to our rescue. The temps reached the mid-70s today, which is fine for an unburdened walk in the woods but awful for a 17-mile hike on pavement with a thirty pound backpack. Therefore, our experiences through Columbrianos, Fuented Nuevas, and Camponaraya were less than happy. Though I should probably speak for myself - the girls were hot but they managed well...

I wasn't doing well when we/I staggered into Cacabelos. Everything hurt, my head ached, and I wanted to stick my head under each drinking fountain. Even the thought of fine wine failed to cheer me up.

There were several advertisements for a hotel along the Camino - the Villa de Cacabelos - the billboards advertised nice rooms, very reasonable prices, and a free buffet breakfast. There's an albergue here that is only five Euros a bed, but it's at the far end of Cacabelos and I was so hot and tired at this point that I didn't think I could drag myself any farther. We are now at the Villa - it is VERY nice and EXTREMELY reasonable - they are friendly to peregrinos!

After we showered and changed, we set off in search of food. At five o'clock, all the restaurants were closed (they reopen around 8:00) - except for the Bar de Peregrinos (just off the Camino, look for the signs). The bar is attached to a Refugio - El Refugio de Saul. The owner cooked us the best pilgrim's menu meal we've ever had. I actually think his bar was closed but he cooked us a fantastic meal anyway, outside of his regular hours. I think he saw how exhausted I was and took pity. We were much obliged. When you come through Cacabelos, check it out - the Restaurante/Bar de Peregrinos. Awesome food, kind owner. The hospitality can't be beat.

That sun killed me today. The girls and Hugh fared far better than I did, but we all feel a bit beat up so tomorrow will be a short day. Not sure where we'll end up. Too tired to look at the map. Am going to hit the hay.