We sit here in Melide, waiting for Terry Gross from NPR to call. Hugh has his cellphone at the ready and I've explained to the good owners of the Pension Xaneiro that Hugh is a well-known American scientist and that he needs a landline back-up because of all his recent media requests due to the Boston Marathon bombings. I'm happy my Spanish is good enough to explain the reason for our unusual request. Like the good owners of Fonfria's A Reboleira, the folks who run Pension Xaneiro are understanding and happy to accommodate. I am doing my best to keep the girls quiet, as the interview will be live and there's nowhere for Hugh to go.

His New York Times and WBUR interviews were done in the thatched-roof restaurant of A Reboleira, out in the middle of cow-country with roosters all around...gotta love modern-day cell phones with 3-and 4G technology.

Wait - turns out the interview will happen later in about two and a half hours. Good - we have time to shower and eat.

Woke up this morning to Hugh telling me that Boston was in chaos, an MIT security guard had been killed, and his students were in their labs on lockdown. Crazy times. We spent the day walking from Gonzar to Melide, but really we've gone from WiFi spot to WiFi spot keeping up with the news.

The girls are doing fine with the mileage. I guess they've now reached a point where walking 18 or 19 miles every day isn't such a big deal. They're also doing well with the news - I don't sugarcoat or hide anything from my kids...never have and never will - they're just happy none of their friends have been hurt and they hope everyone else recovers soon. They're also justifiably proud of their father for the inevitable role he will play in facilitating the recovery of the many victims who lost their limbs.

So yes, we walked a long stretch of the Camino today, and yes, we are close to finishing, and yes, the girls have been successful in raising a lot of money for GirlVentures and Global Fund for Women, two female-empowering organizations. Yet today, for obvious reasons, our minds are on other things.

Turns out the NPR interview will not happen today after all. Might happen next week instead. Hugh is now talking with someone from Discovery. He's getting multiple interview requests every day since the bombings and he is doing his best to be available for every American and international reporter...I am doing what I can to translate the situation to the locals so his communication needs can be met. 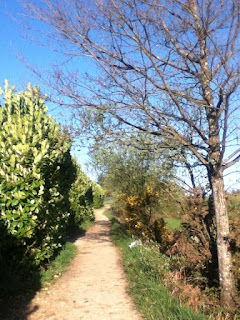 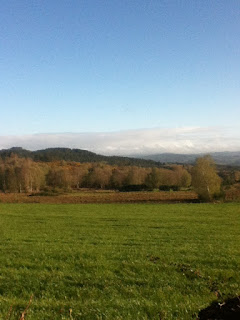 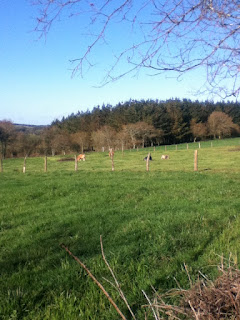 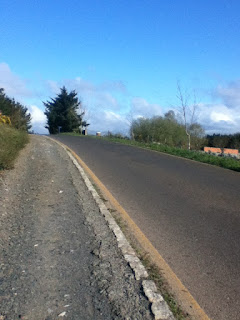 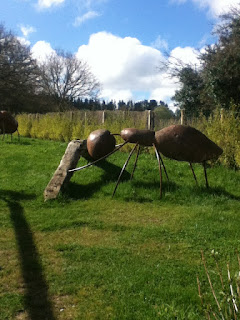 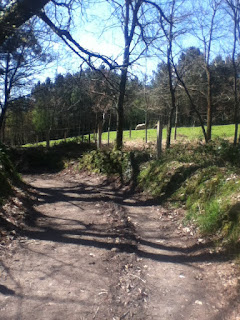 Shortly before entering Melide, Alex took this video of some cows on the Camino.


As mentioned before, we are in the Pension Xaneiro. Our room has three beds and its own bathroom and the cost is forty-five Euros. It seems quiet up here so we should get a good night's sleep. The owners have been understanding regarding Hugh's need for a landline...so two very enthusiastic thumbs up so far.

We have only fifty-three kilometers to go. Barring accident or injury, we should be able to finish with Hugh on April 21 ( two days from now!).

Misc. comments - Ate a normal dinner instead of a pilgrim's menu tonight. It simply wasn't enough food. We ordered another meal after our first meal.

We shared the first half of today's hike with two wonderful Danish gentlemen named Christian and...I'm sorry, I can't remember the other fellow's name! Both were excellent company - they are finishing their last year of high school and they are both 19 years old. We had excellent conversations regarding various aspects of European culture. We hope to see them on The Way again tomorrow, as I think they are here in Melide this evening.

I'm tired...must get up to post this in the bar downstairs (WiFi access). Also want to find out if they caught that piece of crap in Watertown.

Long time blog-lurker, but I've loved being an armchair traveler for your journey! I'm so impressed with you girls (and Mom :)), and wish you the best of luck in your last few days!

Right next to the municipal albergue (which I think you'll probably walk past on your way out of town) is Panaderia Tarrio. You MUST stop and buy a packet of the light coloured biscuits/cookies. They are hard but delicious and will last you to Santiago! The croissants are also divine and if it were later in the day you couldn't go wrong buying an empanada there (we had two!)

I had to google who your husband was. Watched his Tedmed video - very interesting. You are all very blessed to have each other for a family.

Your trip is going very fast and I can only assume it feels even faster when you are the one doing the walking. We will find out next month.