We visited the museum in Carrion de los Condes' Church of Santiago last night before going to bed. The museum was filled with ancient paintings and sculptures depicting the crucifixion of Jesus and the conquering of the Arab "Moors" by St. James (the saint was said to have been an inspirational and rallying figure during the Christian-Muslim wars over Spanish territories).

The images were gruesome and the girls and I had a deep discussion concerning the use of fear and guilt during indoctrination and the many ways in which religion has been used as an excuse to conquer foreign territories. 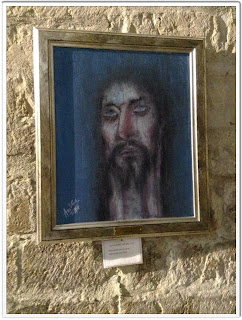 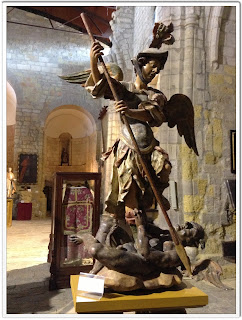 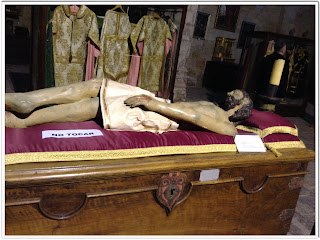 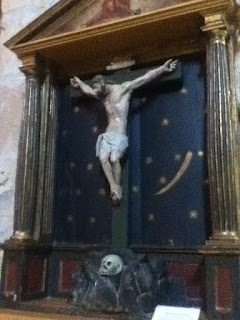 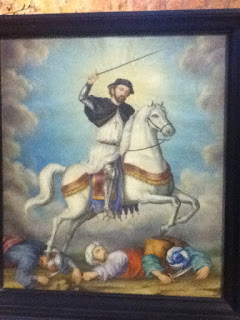 It was an educational experience.

I risk losing followers by outright stating this, but I am not a Christian. I was raised a Methodist, but once I grew into adulthood and began researching the origins, history, and political usage of Christianity and other organized religions, I realized I simply did not/do not believe in the god of Christianity/Judaism. I respect other people's beliefs in those traditions - as long as those beliefs are not being used as an excuse to conquer foreign lands, discriminate against others, or prevent the equal rights of women.

We left Carrion de Los Condes this morning and walked a ten mile stretch that was flat as a pancake and devoid of scenery. The guidebook described the path as part of a 2000-year-old original Roman road, so I thought our day would prove interesting. Alas, someone decided to pour gravel all over this section, so instead of rock-hopping broken stones or carefully traversing a crumbling surface, we beat our feet on an excruciatingly long and straight gravel driveway (or so it felt).

This was our view, for hours... 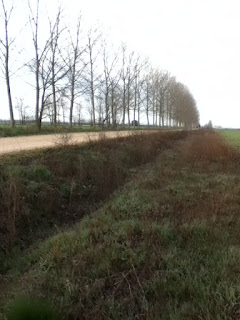 I amused myself (and annoyed the girls) by complaining every five minutes about the gravel, the lack of views, the way the road hurt my feet, etc. Alex rolled her eyes at me a lot and Sage pointed out the path's few redeeming qualities. There was a cute and fat bird, for example, that followed us for miles, chirping constantly and looking adorable. There were trees here and there, and the grass was ever-so-green, etc. That's Sage for you - she tends to look on the bright side of things. Me, I kvetch.

After three hundred years of hiking, we arrived at the small town of Calzadilla de la Cueza. I ordered a drink at the one bar and the girls and I discussed our options. We could stay here in the public albergue (80 people in 2 rooms) or the hotel (40 Euros for a double...that's not pricey, but it's more than my budget allows)...or we could walk another four miles to Ledigos. I read that the private albergue in Ledigos had rooms with a max of 8 people in them...we decided to push on toward Ledigos.

My beer both helped and harmed the rest of my walk. Though I was now in a better mood, my body felt dehydrated. I chugged some water soon after we started out from Ledigos, but then I felt too full. Clearly this was not my day. Either that, or I somehow transformed into a whiney mess during the previous three hours.

The walk to Ledigos was not bad. No never-ending boring gravel. Instead, a little walk by the road, up and over a small hill, into Ledigos itself.

The private albergue, El Palomar, is close to the town's entrance.  We stopped in to check it out - and heaven! Anna, the cheery hospitalera, brought us straight to a bright and cozy private room with one large bed (for the girls) and one small bed (for me). The cost is only twenty Euros total(!). We share a bathroom with two other private rooms. Our beds are soft with thick blankets and we have heat and power outlets. Wonderful.

We ate our pilgrim's menu dinner at the attached bar - a huge plate of excellent salad and a huge plate of two fried eggs, French fries, and ham (each) -- and now we are hanging out in our quiet and comfy rooms. I'll have to post this tomorrow as there is no WiFi here.

I was wrong about the halfway point. We should reach that tomorrow. I'll write a bit more about our overall Camino experiences tomorrow evening, after we have passed that halfway point.

The girls and I have been averaging four Brierley stages every five days. If we keep this pace, then we 'll reach Santiago on April 22 or 23.

We head toward Sahagun tomorrow. Hopefully I'll sleep my grumbles away this evening.

--Trish
- Posted using BlogPress from my iPad
Posted by Patricia Ellis Herr, Alexandra Herr, and Sage Herr at 2:23 AM

Wow... Nearly halfway there! Would love to know your times from point A to B daily as well. It will give us a very good indication of a typical day of leaving, walking, resting, lunch and arriving.

Looking forward to your reflections!!!

Most pilgrims are up at 7am and out by 8. We walk from 8 am to 12 or 1pm and generally cover 12-16 miles during that time period (the girls like to walk fast and the terrain is not difficult). We are in the albergue by noon or 1, then we hand wash our things, arrange our bunks/beds, and go out for our pilgrim's menu. We hang about until 8pm and then we go to bed.

That is our routine - other pilgrims walk slower or faster, they go farther or not as far, they eat earlier or later, and they wake up/go to bed earlier or later. After the first few days, you will discover the rhythm that works best for you. Resist the temptation to hurry up or slow down so you can stay with new friends. It is vital, IMO, to do whatever works best for your individual pace. Otherwise you risk injury (we have met more than one speed demon who is now forced to rest/slow down because of an injured knee or ankle).

Ah, the road between Carrion de los Condes and Calzadilla de la Cueza is a real mental test of the camino. I loved it when I walked in May 2011. It does feel like you're walking on a treadmill in the open air and then, out of nowhere, the little pueblo appears. They say that the camino is divided in 3: the first part (before Burgos) is physical...that's where you get used to the aches and pain. The Meseta is mentally challenging as the body is now running on all cylinders but where there is not a lot of physical challenge so the brain has time to wander. I've seen people cry while walking this part. A lot of people will artificially add the challenge of walking longer distances on this part. The last 200 km are more "spiritual", the mood changes abit around the Cruz de Ferro. Plus Galiacia is beautiful so it lands itself to it.

Thanx Trish for taking the time to share your daily diary! Wonderful to read your reflections/advice. Happy reunion 2morrow!