The rain decided to fall on us today. I wasn't able to get many pictures; I was afraid my iPad would get soaking wet and crash. The girls and I were fine in our technical base layers and waterproof jackets, but hypothermia could have been a real danger for anyone in cotton or without proper insulation.

After bidding our new friends goodbye and wishing them all a Buen Camino, the girls and I headed out of Tosantos. We are optimistic about seeing Franco again, but Alfonzo, Rosa, and their son are going farther today than we want to go, so they might stay ahead of us until they leave the Camino on Easter. We exchanged contact info before we parted ways. We also exchanged contact info with Lena, though I've a feeling we'll see her again too, since she is going all the way to Santiago.

We left Tosantos, went to and through Villambistia, Epinosa del Camino, and Villafranca Montes de Oca, then up and over the hills. 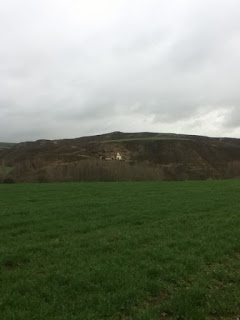 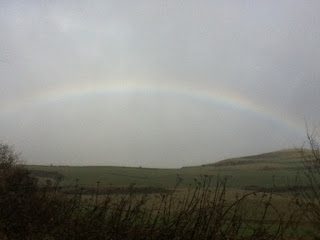 At a monument to fallen soldiers of the Spanish Civil War, near the top of one of the "mountains"... 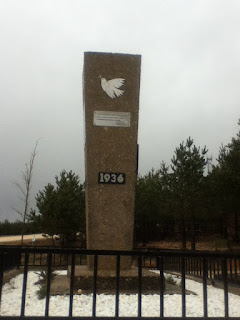 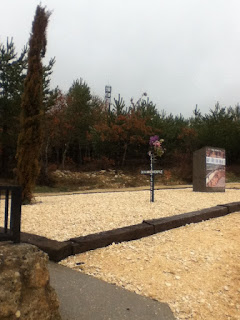 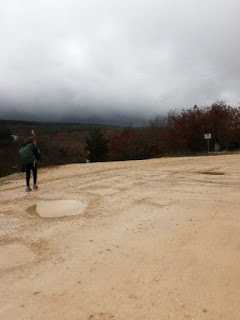 The rain became steady and the wind began to howl soon after this photo was taken, so we put our cameras away for the rest of the day.

We are now in the town of Ages, which is a few kilometers past San Juan de Ortega. The girls and I are tired from staying up late the past couple of evenings and, of course, from walking, so I splurged on a "private" room at the albergue San Rafael. So far, that feels like a mistake. The fault is mine - I should have noticed that our door is missing its top portion...as is the room next to ours, which is the public sleeping area for this establishment. The result is that I'm paying forty-five Euros for a room that sounds like it's full of partying peregrinos since we can hear everything in the other room perfectly loud and clear. We really needed quiet tonight. Also, we were told we'd have a television and we don't (we were told they'd give us one later...but that was hours ago and now we're almost ready for bed). The dinner was good, though -- eight Euros for a tasty pilgrim's meal. Breakfast is supposed to be decent too, but we have yet to eat it so I'll have to report on that later (cost is not included in the room stay). I'll report back on the television issue too. Normally, I don't care about having a television, but I'm paying forty-five Euros so I expect to get what I've paid for. The girls and I thought we could use it during the early evening to drown out the noise of the people in the next room (I'd turn it off after the kids fell asleep and before traditional quiet hours).

One thing is for sure - this is nothing like the wonderful Casa de mi Abuela in Los Arcos. That beautiful place was cozy, quiet, and private. The rooms came with towels, comfy huge beds, and breakfast was only three Euros (it's seven Euros here). The cost was only thirty-five Euros for a private room that easily held the three of us and the experience was a million times better.

Pilgrims coming after me, take note - don't pay for a private room at San Rafael Albergue in Ages, it's not worth the expense. Either do the public room for ten Euros a bed or explore the four other albergue options in town (or in close-by Atapuerca).

Thank you for your comments about the private rooms. My friend and I are walking in late April and planning on using private rooms, so your suggestions are most helpful! Mary